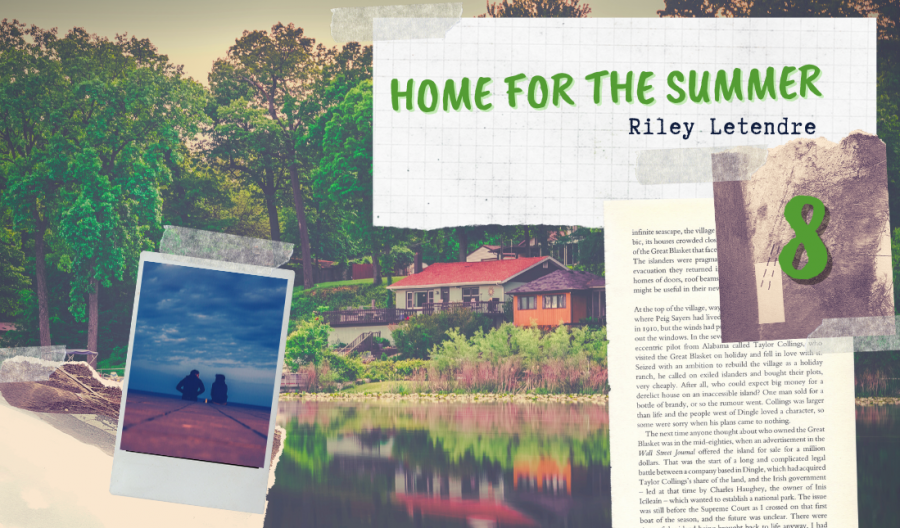 Home for the Summer Chapter Eight

Home for the Summer – Chapter Eight

A few afternoons later, I found myself painting in my bedroom, looking out my window as if that would provide me inspiration. Then heard the most dreaded sound possible, one that usually only comes around every month or so – Gretchen crying in her room. I could see into her room from across the hall, and though her door was unusually open, I couldn’t see her.

I stepped away from my stool, leaving my paintbrush behind as I realized that this could be a time that she wants comfort, or needs it. She would never try to let us hear it. It seemed Johnny and I had the same thought, as he appeared by her door just as I did.

“Do you think she wants us to…”

We tread in anyway, following the noise to see her sitting on the floor of her closet. She had one of Sam’s old shirts on, and it seemed like some of his things had fallen over, perhaps causing this wave of emotion to run over her. When she noticed us, she just looked away.

“The box?” Johnny asked. Gretchen pushed it toward us, standing up.

It was full of things from her wedding. Favors, their champagne glasses, cards from the various guests, and metal picture frames in which the glass had since cracked. Johnny looked through her things, excited to see our only slightly younger selves in the photos. I watched Gretchen look at them with a small smile, holding onto his shoulders like she needed support. Then she laid back on her bed.

I didn’t want to bother her by asking about anything. But at the same time, I wanted to know what upset her. Was it just that he was gone? Or was it that she had to be reminded of it so suddenly?

“Look, it’s the cake!” Johnny remarked, excitedly showing us the picture of her wedding cake. I mean, it was a good cake, but it wasn’t that deserving of his excitement. Gretchen just laughed, knowing it wasn’t worth it to say anything to him.

“You sure you’re alright?” I asked Gretchen.

“Gretchen…” I rolled my eyes. Johnny took my frustration as a cue to leave.

“Don’t be cruel, Summer. Just leave me alone, will you?”

“No. Something’s wrong, isn’t there?”

“No! What did I tell you?” She sprung up, getting back to tidying her room – apparently what she had been doing before her crying began.

“I just want to help.” I maintained my calm attitude. “You know we hear you when you cry sometimes, right? You never let me help.”

“Because I don’t need it. And we don’t need to worry our brother there.”

“Oh come on. He’s grown up more than you think, and that’s our problem here. He doesn’t feel like his voice is important because you keep calling him a kid.”

She just started crying again. “No, I’m not sure! But I know what I’m trying to do. I just don’t get what happened.”

I had never seen Gretchen be so incoherent. I mean, I’ve seen her drunk before so I knew what to expect, but I didn’t expect it now. I couldn’t take watching her cry anymore, so I got up and followed her, pulling her back to sit on the bed next to me.

“But I can help, right?” I tried to assure. She just buried her head under her pillow.

“I’m going to get Johnny out of the house, and have Jack bring us lunch. Will that help? Pressure’s off now.”

“You don’t want Johnny to go out?” I questioned. I could tell by her explanation that I was wrong.

“Why not? What’s wrong with Jack?”

“I don’t want him getting attached.”

“Attached? Gretchen, we’ve had him over once!” I know I was quick to jump to his defense, but there wasn’t anything wrong with him! There wasn’t even anything even going on there, was there? She was the one saying we’d be getting married and that we’re good together.
“You don’t get it, you just don’t get it.”

I walked out in frustration, slowly making my way to the kitchen. Johnny was there, still admiring the cake picture he had taken from the box.

“Look, Gretchen’s having a moment. I’ll probably go out too. She doesn’t want anybody around her, and I think she needs some time alone.”

“I’m going to ask Jack to bring some…”

“… Right now, Gretchen doesn’t want him to come over at all.”

I walked over to the phone, dialing his number on the cool buttons.

“I don’t understand it either.” I replied, holding the receiver to my ear and listening for him to pick up – and he did. “Hey Jack.”

“Can you come over? Gretchen is having a tough day and we need to make lunch… I can’t cook at all.”

“Okay. I’ll come over and take care of lunch, and then I can take Johnny out to run some errands with me while you talk to her. How about that?”

I hung up, smiling a little too obviously at Johnny.

“Gretchen’s right. You are in love with him.” He remarked.