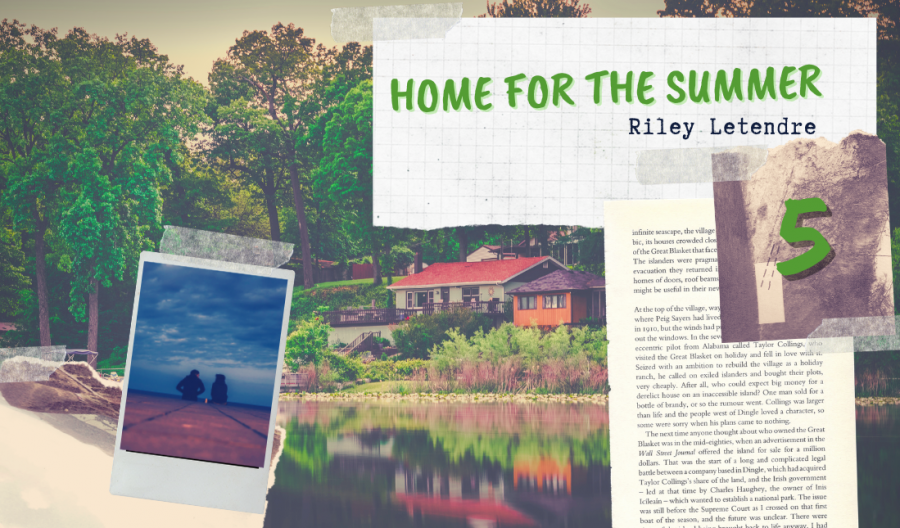 Home For The Summer – Chapter Five

The 4th of July was one whirlwind of a week. Star’s Ranch definitely took the holiday more seriously than other towns, lighting off fireworks every night over the lagoon from the first through the fifth, the parade being the talk of the town, and the Independence Ball at Seaside Manor ending the celebration on a high.

Even though I had just begun work as a photographer for our town’s paper, The Star, most people were out of the office – including myself. The week was just too much of a celebration for anyone to miss, and when they did want me working, it was just to take pictures at events I was already planning to attend with my family.

The celebration kicked off on July 1st with the first night of fireworks. Since we had a beautiful waterside view from our back porch, we didn’t have to go very far to enjoy them. But, of course, Gretchen invited all of her friends over to share our view.

Dozens of people arrived on the early side of sunset, mingling and meeting others as they walked along. Johnny and I sat back on the porch for a while, him sketching the sunset while I painted the scene. I didn’t attempt to make it very detailed, as no purposeful detail could be observed from the fast pace of the group.

Once it grew darker, Johnny and I moved down into the yard to get our share of the food and check in on Gretchen. We sat on the stone fence that surrounded our property, watching her across the way as she leaned against some man I had never seen – her face showed that she was shattered inside. She wasn’t acting her usual peppy self; she was mellow and wasn’t with the right kind of guy to deal with that.

Johnny went to her on his own, shyly pulling on her sleeve as if he was a small child, scared to confront her. She seemed annoyed but willing to listen as he started pulling her away from the man, but he tugged back on her. Before I knew it, I was running to them.

Johnny swung a light punch at the man’s side – too short and small to hit hard or any higher – and the man, to my surprise, swung back. What kind of guy would punch a 12-year-old? He managed to knock Johnny back, all while keeping a hold on Gretchen. She was yelling for him to let her go and cut it out, but he wouldn’t listen.

“Why did you punch my brother? He’s just a kid!”

He didn’t have anything to say to me. He let Gretchen down and I knelt by Johnny’s side to help him up.

Slowly, all three of us tread inside to the quiet.

“What were you thinking?” Gretchen yelled out of nowhere. “You could have been killed!”

“Then why do you dance with guys who could kill me?”

“We just wanted to see that you were alright. You didn’t look good.” I said, trying to calm her.

“I’m fine. Now let’s get you fixed up so we don’t miss the fireworks.”

“No, let me do it.” Johnny hopped down from where he sat on the counter, going off to the bathroom. “I wouldn’t want to spoil your fun because I tried to do the right thing.”

There it was, his first tinge of teenage attitude. Surprisingly, it didn’t feel too terrible. Still, I was nervous for him.

“Gretchen, we were just a little worried – honest. And I guess our intuition was right.” I kept my voice calm as to not make her more upset, and lessen Johnny’s worry.

“Oh, you say that about all of them.”

“Have you ever thought about what Sam would say to this?”

“Sam would never want me to move on.”

“Gretchen…” I sighed, taking her hand. “He would want you to be happy. That’s all.”

The first firework for the evening exploded into the sky, visible from the small window over our kitchen sink, so we ran back off into the yard. Gretchen was ahead of me, trying to reach the shoreline with the others to get the best view. I somehow managed to trip down the stairs and skid into the grass.

“You alright, Summer?” Jack spoke softly, lending me his hand to help me up.

Literally, how did he keep showing up? He was always right on time.

“I’m always running out of time.”

July 4th was a hot day, with the sun melting the paved roads and poorly painted red and blue lines adorning the accompanying sidewalks. Crowds gathered early to grab their spot on the route – their spot for the “legendary parade” that at best was mediocre.

I was there with my camera at our neighbor’s house, whose house just happened to corner the main road where the parade traveled. I brought Johnny along, in hopes of him enjoying the view along with me. Gretchen was actually in the parade with the town’s Flower and Garden Club, so she left early in the morning to meet with her friends. She wasn’t a very active member, but she lent a lot of money to the group and was the young face of the organization – she was heading the float.

The parade slowly came our way – a vaguely patriotic set of kids followed by the Mayor. Most of the floats were from churches and town organizations, like Gretchen’s, but I have to say hers was the most and best decorated. Since I had a press pass, I could walk up close to the floats and in-between them to get better shots than I may if I were only allowed the sidelines. I must have gone through two packs of film in just the first half.

Then, there was a surprise toward the end – well, at least for me. Jack was on a float for his bakery. Usually, businesses didn’t have floats in the parade, but his family ran the main shop in town, so that made sense. I walked alongside the float, attempting to get some good shots.

“And here you are again!” He shouted to me over the music.

“Are you going to the Independence Ball?”

Going with Jack? That would be a dream. But I gazed farther down the route as I pondered and was met with Gretchen’s face. She would never let me do that. I guess I could if she didn’t find out.

That night, we entered the Seaside Manor from the main entrance – Gretchen, Johnny, and I dressed to the nines and standing together. Johnny pulled us closer together as we walked down the stairs, one sister for each arm. Gretchen wore a sparkling new dress, as she had to have a new dress for every occasion. I had worn the same dress last year. It was green and went to my knees, which was not nearly as long as everyone else’s. The event was definitely required evening wear, so I was surprised I was not called out for my less-dressy appearance.

We went along to the table marked for us and took our seats, two empty spots for if us older girls had wanted a plus one. I was glad Gretchen didn’t jump at the opportunity to bring someone. It was probably because of the guy she had over earlier this week.

Sooner or later, Johnny was occupied – talking with his friends. And, of course, Gretchen wasn’t alone for very long; she went off with someone new. I looked around for Jack, wandering aimlessly around the venue.

I had never taken much time in the past to admire the architecture and beautiful artwork adorning the walls of the manor. Long ago, this had been someone’s home, but it was almost impossible to see it as a place to truly live in now.

I was admiring the view out a closed window when a hand met my shoulder. As I turned, Jack’s face came into view.

“I’ve been standing here for a while, you know.”

“I didn’t know what to do either.”

He smiled as if he saw right through me, then moved our conversation onward.

“We can’t dance with everyone else – Gretchen will see.”

“Then we can dance right here. It will still feel the same, won’t it?”