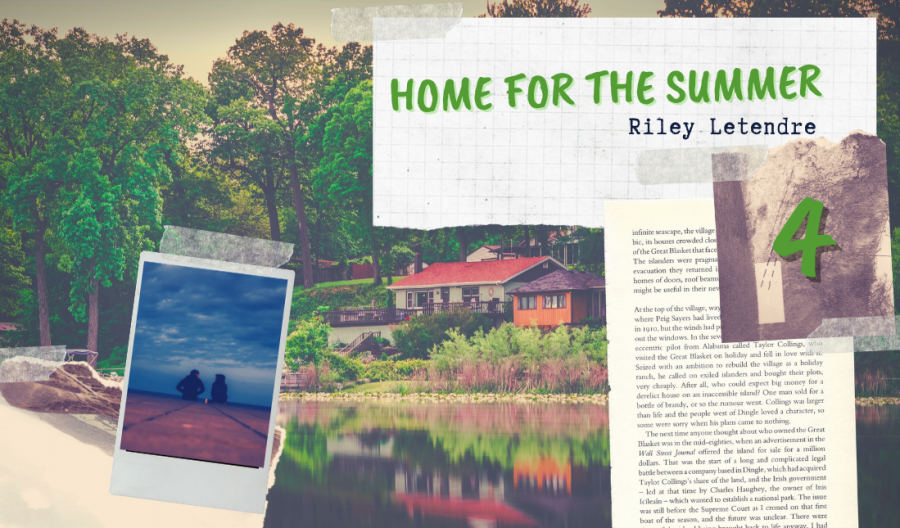 Home for the Summer – Chapter Four

Johnny, Gretchen, and I laid out on the sandy banks of Miles Lagoon- the beach section was only a stone’s throw from our back porch. It was too hot to do much of anything, especially as we neared the 4th of July. We wouldn’t even go in the water for fear we’d never want to get out.

It was a shame, as I could see some of Johnny’s friends running up and down the shore, swimming out to the raft and climbing on large rocks the waves had carved up for centuries. But he wouldn’t just get up and go with them, and I didn’t get why.

Instead, we gathered together on our towels, Gretchen tanning while Johnny and I sketched under our shoddy umbrella. Johnny flipped page after page, starting over with new people every ten minutes or so. I carried the polaroid of Jack with me, hitting every feature of his face with my sketch. I spent a lot of time on it- I don’t know why, but I felt like it had to be perfect.

Through the hours, many different people approached us. They were all friends of Gretchen- or boyfriends, she would never specify. I swear I met at least four guys named Dave that she had supposedly dated by that time. I didn’t know what kind of appeal she saw in guys named Dave, especially ones that would creep on her for a while before approaching her. Some of these guys were the notorious town creeps; she could do so much better than them.

I didn’t happen to know anybody on the beach. While I may have recognized them- that was common in such a small town like ours- I felt like a nobody. Gretchen was the sought-after one, Johnny was the known one, and I was the nobody. In school, I was the kid who would sit there and draw, avoid eye contact with those around me as I sketched in my book. I didn’t seek relationships, I sought silence I couldn’t find anywhere else but in the solace of a pencil and page.

Gretchen flipped over on her back, adjusting her sunglasses as she tanned.

“You two are so antisocial- why don’t you go off and do something?”

“You’re blocking my light, Johnny.” She scoffed, pushing him over into the sand. “How about you guys go get ice cream while I finish up?”

“We aren’t five, Gretchen.” Johnny pinched her ankle, making her swing her arm up and playfully slap his cheek.

I pulled Johnny up and we started the walk toward the snack stand. Our feet sunk in the hot sand, eventually hitting the hot pavement and splintering wood. As we got in line, we focused our attention on the menu ahead- not like we didn’t already know exactly what we wanted.

“Two Mississippi Mud ice cream sandwiches, please,” I ordered, Johnny paying up the cash for us.

Johnny and I always had a thing for those Mississippi Mud sandwiches- back when our mom was still around, she would always get one for each of us. Of course, Gretchen refused to eat ice cream now, but Johnny and I never hesitated to carry on the tradition. I was the real chocolate fan of the three of us, but we all enjoyed it equally.

They forked our sandwiches over, the cold wrappers spilling drops of condensation on our hands. We took a seat at one of the picnic tables, looking out on the water.

“Should we have gotten one for Gretchen?”

“Not like she would eat it. It’s like she doesn’t eat anything anymore.” Johnny sighed. “Just be glad you aren’t here all the time, that’s what I’m saying.”

“It’s just too sad seeing her like this. You know, I come home from school and she doesn’t even look happy to see me. It’s like she can’t bring herself to be.”

Though I hated to admit it, I had noticed. Johnny would try to show her his sketches or ask her questions, and she looked right through him. She kind of did the same thing to me, too. I think she lives in her head a lot, attempting to fill the familial places that have long since emptied- trying to imagine my father and mother and Sam and what their place would be in our current lives. Gretchen wasn’t always one to dwell, but now she was. Still, I had to defend her just a bit.

“She tries, Johnny- I know she does. But it’s like she just can’t let go.”

“Yeah, she can’t let go of me! She doesn’t let me do anything. Mom let you do a lot more than she lets me do.”

“I wanted to go to the semi-formal, and she said no.”

“Don’t worry, it was a while ago. But Gretchen said it was because she didn’t trust me.”

“While I think it’s ridiculous, I don’t think the problem should have been trusting you. You’re the most trustworthy kid I know.”

“She doesn’t think so. She just has to control everything, and she won’t let me step up whenever I ask.”

It was a shame that everything that has happened did in the first place. Johnny should not feel like he has to step up at all. I know that’s why Gretchen won’t open up to him or let him be involved in anything greater than his age- she wants him to stay young for as long as he can. I agreed with her on that, though she didn’t go about it in the best way.

I was having a hard time coming to terms with the idea that Johnny wasn’t a little kid anymore. For the last four or five years, I spent my summers watching him and bringing him out to do various activities- playing alongside him at the playground, taking him to sports practices. I cleaned his cuts and Gretchen was always right beside me, laying on the bandages. He looked up to us, just as I looked to him for the assurance I needed that what I was doing was right. But now he was figuring out that we weren’t as perfect as he thought us to be, that both Gretchen and I had our problems just as he had his.

Johnny wiped melting ice cream from my hand as I just held the sandwich, not paying it any attention.

“Are you going to eat it or what?”

“Of course I’m gonna eat it, you knucklehead.”

That night, I wandered the beach aimlessly. I let my mind air out all of its anxieties and annoyances to the nothingness around. I ignored the dream that had woken me up in its entirety and used the time to think about more pressing things, such as getting through to Gretchen in any way possible and bringing my family back together.

In my eyes, the answer to the latter was easy- I can’t continue college at a school so far away. I need to stay here and take care of my family. But there was already a lot of pushback from Gretchen and Johnny about that. I also didn’t want to let Johnny down in doing that- he might not see his dream as viable if I quit on mine. Of course, I wouldn’t be totally quitting on it, it would just not be my main focus.

My eyes chased sparkles on the water, trying so hard not to focus on the part of this that would involve informing Gretchen. But it seemed sooner or later I wasn’t alone.

“You’re always around me, Summer. Have you ever thought of becoming an FBI agent?”

“I wasn’t looking for you, stupid. I’m just trying to clear my head.”

“Sure you are, just clearing your head in the middle of the night on a beach.”

“I’ll have you know I live on this beach.”

I realized I was being rather rude, so I tried to walk away from him.

“I’m not exactly trying to run into you every time we meet,” I replied, turning around. “While I don’t mind seeing you, it isn’t my intention.”

“I don’t think it’s mine either. Maybe it’s the magic trying to tell us something.”

“Oh, you and all this magic crap. The magic hasn’t saved me yet.”