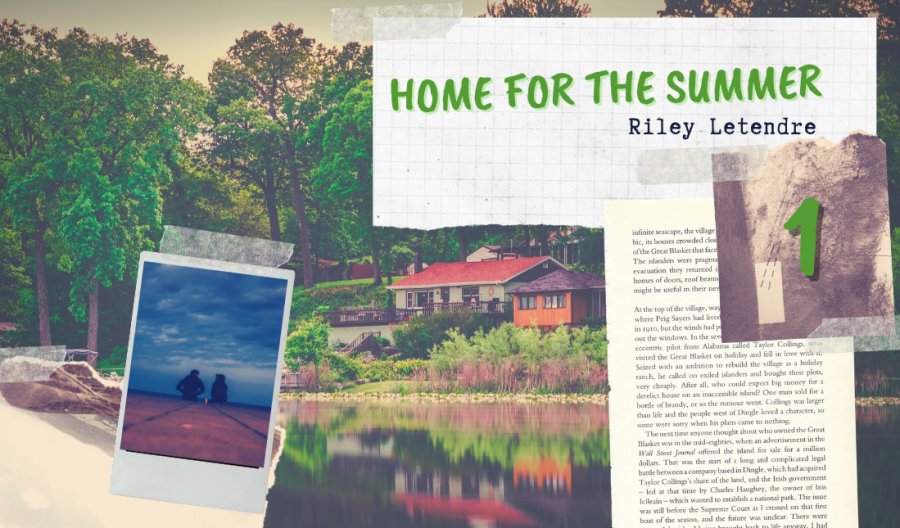 Home For The Summer – Chapter One

All of my nights followed the same pattern. I would go to bed, sleep for three or four hours and inexplicably wake up from a nightmare I never quite remembered. There was always someone or something trying to get me.

When I woke up, I would be so scared for my life that I couldn’t go back to bed. Tonight was unusual in the grand scheme of things- I had fallen asleep early from the jet lag of flying home from my college in California. A June breeze blew in my window, and it occurred to me how much time had passed since I had been home. This was my first time sleeping in my own bed since I left for Palm Springs in August and while I was excited to be back, I was nervous too. Going to college has made me a different person, and I was afraid my sister and brother wouldn’t like who they were meeting.

My little brother Johnny was 12, but he looked 14 if you squinted your eyes just right- at least, that’s how he put it. But while he looked 14, he definitely didn’t act like it- while I was at college, he would call me every week to say he missed me and tell me about his latest sketch. He was an avid artist, just like me. Ever since he could talk, he always tried to be like me; he wants to go to art school as I have, but my sister isn’t having it- at least not yet.

Gretchen was 25 but could pass as my twin- the better version of me- with her matching black curls and superior body that you would probably see a doppelganger of in a nearby Cosmo. I used to paint her often before I went off to college, and I even used one of her in my portfolio. While her skin and smile showed off her youth, her eyes didn’t. At heart, she was a kid who had seen too much and she wasn’t ready to take care of her siblings or lose a husband.

Around this time last year, Gretchen’s husband Sam passed away. They were that couple- you know, the high school sweethearts who never had aspirations bigger than their hometown- but not even in a bad way. Gretchen just sought out happiness and stumbled upon Sam.

Sam took us in when our mother was sick. We had known her time was coming, but if we didn’t have Sam to take care of us at least financially, God knows where we would be. He was a rich kid, and he left all he had to us when he was caught in a bad hit and run. They never caught the guy who did it, and, understandably, Gretchen could never rest knowing that.

I didn’t want to leave Gretchen and Johnny after everything happened with Sam, but Gretchen insisted I had worked too hard not to go. And though he cried and so did I, Johnny wanted me to follow my dreams too. So I did, and I didn’t look back.

It must have been seven at night when I woke up. Instead of going to bother Johnny, who was up drawing on the front porch, or Gretchen, who likely had a few drinks in her by now, I decided to leave the house instead. I figured anything would be better than just laying in my room for the next ten hours. I got dressed and hopped out my window, carefully following the path to Miles Lagoon.

Down at the lagoon, I walked and walked until my feet were sore- until I couldn’t remember why I had woken up in the first place and then recalled it again. I went by the usual patches of muddy cattails and rocks before coming up on the park- alive with the sounds of the town carnival.

I had voiced my interest in going this year, but Gretchen insisted we were all too old and that it was a waste of money. I knew she just wanted to avoid thinking about the times Sam took us, when my mother dropped us off there, or even the days when my father treated us, though I didn’t remember the latter as she did. It seemed that for Gretchen, the carnival always brought pain. But for me and Johnny and seemingly everyone else, it sparked joy.

I had my wallet on me, so I went onto the midway and searched for the ticket booth. I had been on all the rides before and tried every snack in visits past, but the one thing I had never done was visit the fortune-teller. Back when my mother was around, she always told us never to waste our “precious tickets” on the fortune-tellers, but she wasn’t around to stop me now. I waited patiently in the line of just two people, forking over ten tickets that cost me two dollars.

She only had to look at me for a moment to know I was struggling. Was I that obvious? Usually, with a fortune-teller, you’d be able to tell they were faking it or where they were getting their information about you from. Like in The Wizard of Oz, that supposed fortune-teller was studying the picture of Dorothy and Aunt Em while Dorothy had her eyes closed and he simply made some guesses, but this woman knew nothing- she couldn’t have. I stepped in there as she paused, pursing her lips.

I mean, that part was obvious since I didn’t try to hide my eye bags at this time of night, but she continued:

“Your dreams are keeping you awake, right?”

“Yeah…” I remarked quietly, sitting down gently as she took my hand. I watched her eyes trace my callouses and all the lines in my skin. I wasn’t much of a believer in the spiritual- her little tent was decked out in crystals and tapestries and I wanted to choke on the smell of incense- but to me, all that gave an aire of credibility. Her gaze slowly shifted back to me, staring into my eyes.

“I don’t even have to know what your dreams are about to know that they stem from needs that aren’t met in your life. This summer, those needs will be met, and you won’t want to accept it.”

“Your hands tell me that you’re stubborn.”

I quietly stepped out, not bothering to ask for more or take her card or anything. I honestly didn’t like what she told me. I walked across the alley, staring at the neon sign outside it, reading Madame Devarou. Glowing blue, pink, yellow… blue, pink, yellow- it hurt my eyes.

I kept on walking, my saddle shoes sinking in the leftover mud from this afternoon’s rainstorm. All paths led to the ferris wheel, so I looped around to the other side of the field. It grew darker, and more teenagers took over the landscape around me. And though I technically still was a teenager, I felt old considering everyone around was about six years younger than me. I was hungry- dying since I didn’t have dinner- so I went to search for a funnel cake stand.

The last time I had a funnel cake was last year with Johnny and Sam. We were waiting for Gretchen to come back from the bathroom- the line was painstakingly long that afternoon since it was the 4th of July- and Sam was telling us stories about where he had traveled on his “bachelor summer,” which was what he called the summer after his high school graduation where Gretchen dumped him before their eventual reunion. One thing he said about it always stuck with me.

He said that even though he had been all over the world and met countless, countless people, no one was like Gretchen, and nowhere in the world was quite like here- Star’s Ranch. He learned he could have anyone, and live anywhere, but he knew inside that his happiness was Gretchen.

Gretchen and Sam treated Star’s Ranch like it was Heaven. I guess it was… for them. And while I did envy their simple kind of love, the love sung about in all those old songs and acted out in the technicolor movies, I knew Star’s Ranch wasn’t the place for me to find it.

I reached the deserted funnel cake stall across the midway and fumbled through my pocket for a dollar before I reached the window.

“I’ll have one funnel cake, please.” I muttered, sliding my money through the window and dreading Gretchen’s reaction to me eating such junk. Maybe she wouldn’t find out this time.

“Rough day?” the boy inside asked. “Or did you ride the tilt-a-whirl too many times?”

“Oh… well, Star’s Ranch is full of magic.” He set his elbows down on the counter, laying extra whipped cream down on my slab of funnel cake. “And it always comes right in time to save you.”
He pushed the funnel cake to me, still not having taken my dollar, and not breaking the gentle eye contact we had kept for a while.

“My money’s right there.”

I walked away slowly, trying so desperately not to forget that boy’s face. It was new, something different- I wanted to paint him. Though I didn’t buy all of his Star’s Ranch jargon, I knew he meant well.

Maybe that damn magic would come in and save me one of these days.