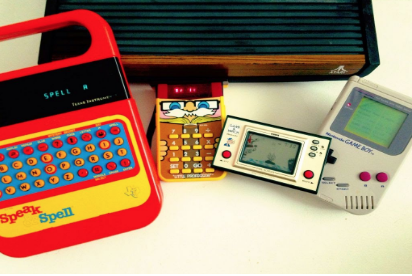 Remember when these fluffy things would wake up in the middle of the night and start talking out of nowhere? These American electronic robot toys originated in 1998 and were updated to create the Furby Boom most of us remember in 2012. Furbies are interactive owl-hamster-like creatures that “talked” and moved. With the release of the Furby also came the Furbies app that allowed us to name and play with our Furbies until their discontinuation in 2018.

Remember when your first Tamagotchi died and you saw their little tombstone on the screen- good times, right? Tamagotchis are Japanese handheld digital pets that were released in Japan on November 23, 1996. Tamagotchi pets could be cared for as much or as little as the player wanted to, which meant that the future of the pet depended on the player’s choices. Feeding, playing, discipline, and medical attention were all the responsibility of the player. Even if the pet can become potty trained, tantrums and illness could pop out any time. As the Tamagotchi grew, it could die of old age marking the end of their family tree, making for a pretty fun and traumatizing experience.

Remember slamming these toys into the ground as hard as you could even if they only needed a small impact or the special cards to open up? Similar to Yu-Gi-Oh, Bakugan were small fighting creatures that kids would collect to battle with. These small orb toys that transform into creatures, like dragons and snakes, after rolling over a playing card. After their release in 2009 Bakugan toys were discontinued in 2019.

Remember when no adult could find the batteries for both the hamster and the enclosure? ZhuZhu pets, also known as go go pets, were small fake hamsters that would coo and squeak and run around their enclosure like real hamsters. The way to make them move was by petting their heads or booping their noses to wake them up. The hamsters came with names and personality descriptions like Mr. Squiggles, the scatterbrained yet organized hamster. ZhuZhu pets were the trend gift in December 2009, with parents buying the different colored hamsters for christmas.

Remember when you baked your first treat under the heat of a light bulb? These kid-friendly ovens were first made in 1963. They were made to match the look of a conventional oven, but were given a brand new look in May 2006 when the Easy-Bake came out with bright pink, yellow, and white ovens that looked nothing like the older version. By 2007, some accidents led to another redesign in the Easy-Bake, which changed the design into the 2012 version we are used to now. These ovens now come in white and pink or black, and have kids bulk-buying the pre-made fondant and multiple doughs for their homemade snacks.