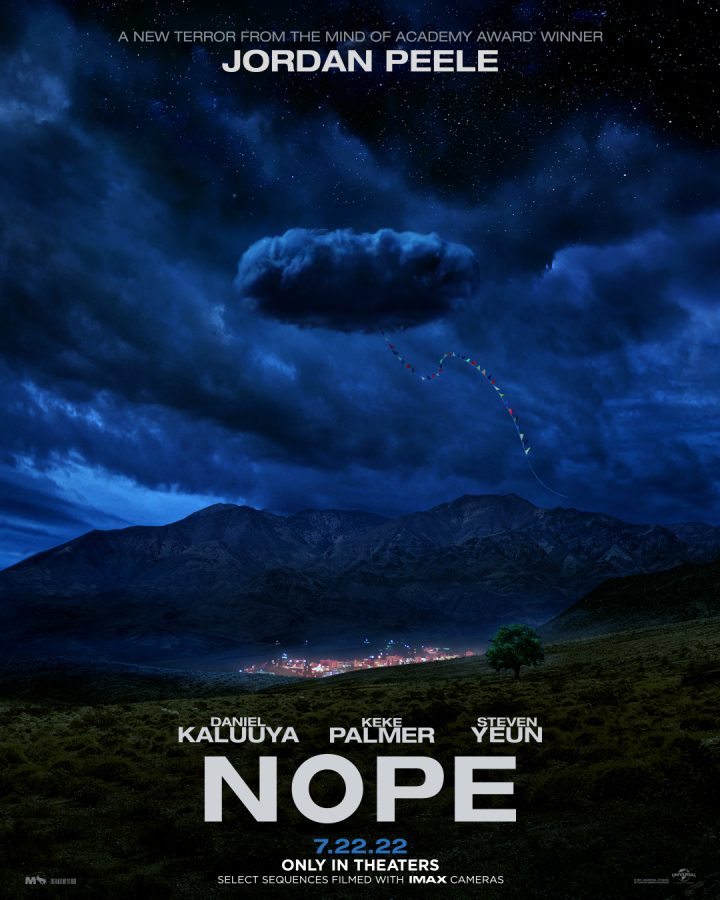 The theatrical release poster for Nope, written and directed by Jordan Peele.

Summer 2022 brought some great films to movie theaters around the country. With highly-anticipated blockbusters like Top Gun: Maverick and Minions: The Rise of Gru, theaters were packed every weekend. I watched both films and thoroughly enjoyed them. More recently, however, I sat in a seat at my local theater for just over two hours enduring the extreme boredom that was Nope.

Written, co-produced, and directed by Jordan Peele, Nope is a science fiction horror film based in Agua Dulce, California. It follows Otis “OJ” Haywood Jr. as he seeks to uncover what is behind the mysterious death of his father, Otis Haywood Sr. Left with the family business, OJ and his younger sister, Emerald “Em” Haywood, struggle to keep up with the film industry’s needs and are forced to sell some of their late father’s horses. One night, OJ’s horse, Ghost, is seen in the farm’s arena staring out into the sky. When OJ goes to check in Ghost, he is met with confusion as Ghost jumps out of the arena and into the distance.

OJ notices strange occurrences for the rest of the film and this is where the ‘horror’ begins to come into play. This is where the film begins to fall apart. The first 45 minutes or so is spent by introducing characters, highlighting the landscape of Agua Dulce, and watching OJ’s lack of joy six months after his father’s death.

The film is reminiscent of your typical DIY monster-hunting type of scenario. OJ and Em buy an expensive security system and install it on the ranch with hopes of capturing footage of this mysterious UFO that is believed to be taking the horses, then they devise a plan to capture it on an actual film reel, and many people die along the way. What gets me the most is that this film is classified as a ‘sci-fi horror’ film when it is in no way a horror film.

We’re introduced to different ‘horrifying’ creatures throughout the film. First is a crazed chimpanzee named Gordy who slaughtered all but one actor on a late 90s sitcom. Next are the tiny Jupes from Jupiter’s Claim, a theme park right next to the Haywood Ranch. These tiny Jupes are the owner’s children who dressed as aliens and attempted to scare OJ as he was closing up the stables late one night. I’ll admit that these three goons did freak me out a bit at first until I realized that they were just kids.

Lastly is the UFO itself, which isn’t what you’d traditionally expect a UFO to be. There were no aliens inside the ship, in fact it wasn’t even a ship. The UFO was one giant alien in the shape of a flying saucer that sucked up its victims if they looked up at it.

Going into the theater with my friends, my hopes were held high and I was anticipating a jumpscare or any type of scare that would be good enough to wet my pants, but I was unfortunately let down. This so-called ‘horror’ film felt more like a seven-episode first season of unnatural occurrences condensed into two hours and 15 minutes. I really enjoyed the cinematography of the film, however, and that is what convinced me to endure the full length of the film. Had it not been for the beautiful landscape shots of the film, I would’ve been out of the theater within the first half hour.

Overall, I would not recommend this film to anyone who has little to no patience and is looking for the adrenaline rush of a true horror film. I would recommend it, however, to those who have absolutely nothing to do on a Friday night. Just wait until it comes on streaming platforms. It’s not worth your money.