The Empowering History of Cross-Dressing 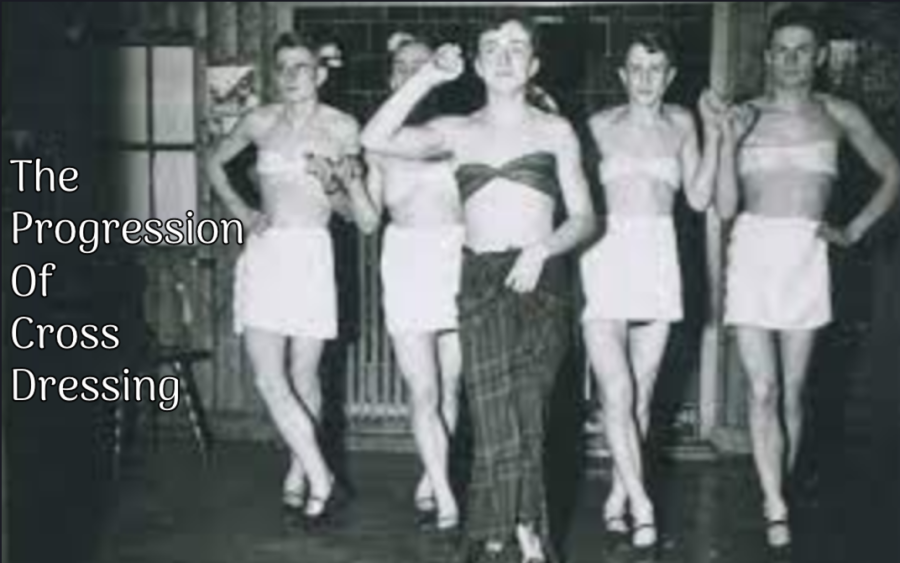 Cross Dressing has been around for centuries, the question is... how has it evolved?

The Empowering History of Cross-Dressing
From fearless drag-soldiers of WWII, punk 1980s gender revolt, and sensational pop-culture fashion statements, the mysterious yet captivating history of cross-dressing is a lengthy, yet surprisingly unknown. The well-displayed glamor of risking reputation to conform to one’s true identity was (and still is) a continuous stepping stone to modern rebellion.

‘Cross-dressing’ refers to the wearing of clothes designed for the opposite sex.  As taboo as it may seem, cross-dressing is seen and described as an art form by many in its community.

Billy Porter, an Academy-winning actor, singer, performer, and LGBTQ+ icon described the art of his eccentric fashion choices to Vogue Magazine after building himself a reputation for walking the red carpet in gowns and heels rather than suits and ties.

“Cross-dressing triggers something in people who don’t understand that a garment is just a garment. The patriarchy has established a society where women in suits are seen as powerful, and men in dresses are viewed as weak. Why is that? I don’t understand it, I don’t like it, and I am not a part of it.”

It’s true. Society has seemed to have built fixed standards for the definition of femininity and masculinity. For many, these implied “rules” to fashion seem captive and useless. This is where the art of cross-dressing is introduced.

Surprisingly, men dressing as women was more acceptable in the time of chastity belts and witch-hunts than it appears to be today.

During the late 16th century to early 17th century, when many of English playwright William Shakespeare’s plays were at the height of popularity, the English crown of Queen Elizebeth I and King James I decided that women were no longer allowed to perform on the stage, as well as have many other privileges men were freely given. Many of the themes displayed in the popular plays of the time included prostitution, sexual incontinence, and lasciviousness. The royal court, fearing that having women portray these types of characters would reflect upon their self-image, decided to ban women from performing in all commercial acting companies until 1661.

On the other hand, allowing men to portray the female characters did not pose a threat to their gender hierarchy, and therefore were able to carry out the productions featuring an all-male cast.

The actors who performed the female roles were some of the most respected in the cast. It took a special type of actor to be able to perform the mannerisms and vocal delivery of a woman. Most companies opted for pre-pubescent boys to perform the roles such as Juliet due to their naturally higher voices and smaller frames, or soprano men for older more mature roles such as Juliet’s Nurse.

Before anyone asks, yes, the boys and men featured as the female roles performed in makeup, wigs, and dresses. Anything for the audience.

As the second world war stormed on, women weren’t the only ones taking on the roles of the opposite sex.

When many men were drafted away to the ports of the U.S Navy, that meant time spent away from their lady counterparts. Many sailors’ ways of combating this issue was to dress their fellow servicemen and themselves up to perform comedy skits and sing songs impersonating the women they left behind at home.

Props like wigs were constructed out of mops, dresses out of bedding or towels, and bras out of coconuts. Some men chose to impersonate their significant others, while others created exaggerated personas of their mothers or sisters. These spontaneous performances soon turned into key parts of many on-board celebrations and provided stress relief, entertainment, and distractions from the reality of war to those on deck.

Many of these activities were not discussed in the letters returning home and were kept secretive as something shared only among those aboard. However, once the word spread, these routines were seen as harmless fun, or ways to poke at Hollywood. Eventually, the media began to take inspiration from these events at sea, and drag was born.

The media’s influence on drag culture hit hard throughout the late 20th century. Representation seemed to pop up from every corner, and many cult-classic films like The Rocky Horror Picture Show (1975) or To Wong Foo, Thanks for Everything, Julie Nomar (1995) showcased sexuality in unique and bold ways for the time, involving the inclusion of transvestite, transexual, and cross-dressed characters played by big-name actors like Tim Curry and Patrick Swayze. As many fans saw their favorite movie stars open up to the idea of gender fluidity, a larger audience began to understand the concept of gender and sexuality on a spectrum.

Aside from the television, music culture heavily influenced the drag movement as artists from various genres including punk, rock, and pop included references to cross-dressing in their music videos, album covers, and social image.

Many male classic-rock figures like David Bowie, Elton John, and Queen’s Freddie Mercury presented themselves dressed in ball gowns, skirts, and heels for concerts, photoshoots, and MTV music videos throughout the 70s and 80s, before cross-dressing among men hit a resurgence during the 90s benefiting the punk-rock genre with metal-punk bands like Nirvana.

Another note to mention, it was throughout these decades that the drag shows and bars we all love came to be a regular part of a weekend getaway in Key West, Vegas, or wherever you fancy.

Today
In the past, cross-dressing was a way for many men and women to explore their freedom and self-expression. Today, it holds the same value and has become a symbol for acceptance, equality, and confidence. However, in today’s age of activism, you can’t walk freely without something obstructing your path just yet.

In December of 2020, Vogue Magazine published their monthly copy with British pop star Harry Styles on the front cover page, with the purpose of highlighting his success with fame regarding his second solo album, Fine Line. Disregarding Styles’ popularity, the main focal point that caught the attention of the press bloodhounds was not found inside the pages of the magazine. The cover photo featured Styles posing in a light blue gown designed and sewn by his partners at Gucci.

While December’s magazine was one of the most purchased copies of the year, the cover photo did not sit well with many intolerant viewers.

Owens’ tweeted, “There is no society that can survive without strong men. The East knows this. In the West, the steady feminization of our men at the same time that Marxism is being taught to our children is not a coincidence. It is an outright attack. Bring back, manly men.”

Soon after this tweet was publicly posted, it became clear that its intention was to dig at Styles and other men who choose to express themselves through genderless fashion.

What was Harry’s response to this? A week after the tweet went viral, the pop sensation posted a photo to his Instagram account posing in a baby blue fanned suit holding a banana. The best part: the caption reading, “Bring back manly men.” An eye for an eye?

Thanks to the media’s new representation of queer, trans, and cross-dressing folk, many in these communities feel more comfortable in expressing their own style both in-person and online. Headlining fashion markets have begun to provide “gender-neutral” clothing for their targeted markets, offering styles unique to all sizes and genders. Men and women who choose to cross-dress no longer have to limit themselves to diminishing labels, and with the history behind their art, are allowed to flourish in their own identity.