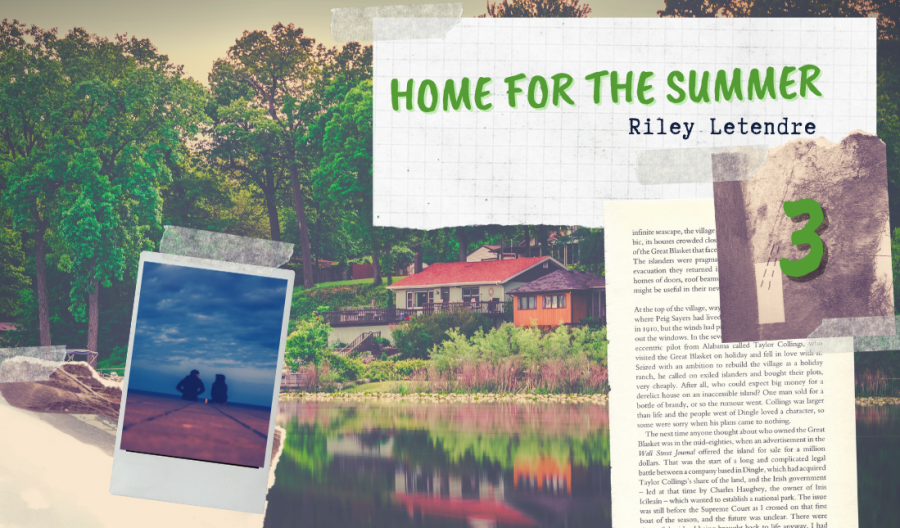 Home For The Summer – Chapter Three

The night of the party was a long one. I had to drag Gretchen and Johnny home- one drunk and one tired- and upon going to bed, a new nightmare woke me up almost right away. In the time I was awake, I decided to develop the photos I had taken since it was dark, and there wasn’t much else to do.

I took the roll of film from inside my camera, setting everything I needed up by my windowsill. This was a great time to work since I needed complete darkness- the only light I had was the moon.

The party wasn’t amazing, but it wasn’t as terrible as usual. That was for one reason and one reason only- Funnel-cake boy. While Johnny and I were still subject to terribly boring conversations with our cousins, I managed to get away from some of them.

About halfway through the party, I found myself at the bar, just asking for water. He was sitting there, not in attendance of the party but not exactly being unobservant either.

“Your sister threw this party?”

“Doesn’t seem like you’re all having a good time.”

“You got that right.”

“What is the party for?”

“No idea. Sometimes she just does this to hide her true feelings.”

I started to walk away but he followed me.

Before he could argue further, Gretchen climbed up on the bar, almost falling over in her heels, and some guy she was standing with turned up the music. She started to dance, and all I wanted was to run off and hide.

I couldn’t believe that the guy she was with would let her do that. Now that Sam was gone, the men she sought were very shallow. I think she knew no one could ever make her as happy as Sam had, so she dropped any standard she could have for herself. She could have anyone she wanted- she had the looks and the personality for it- but she just wouldn’t be selective anymore.

I knew the guy she was with- he went to high school with me but was older. He wasn’t a very great person, but Gretchen could see the good in anyone, so it was no shock that she was fooled. I couldn’t tell you if they were dating or not, but there was interest there. Gretchen would never tell Johnny or me about her relationships because she didn’t want to bring anyone new into our lives without knowing it would last. She didn’t want us to know how desperate she was.

She tried pulling me up, but I wouldn’t join her. I had fallen victim to the game before, and it didn’t get me anywhere.

“You’re so lame…” she scoffed, pulling up one of my cousins to dance with her.

I wanted so badly for someone to just swoop in and get her down, and thankfully, that’s pretty much exactly what Jack did. I guess he didn’t swoop in- he just happened to be standing there as Gretchen fell off.

Well, there goes any chance I had of being close with Jack. Any time I had ever met or been close with a guy, they would meet my sister, and that would be it for them. It didn’t matter how much older or how unattainable she was, they just would no longer look at the meager younger sister when the older version was so much better.

Yet as soon as she fell into his arms, he looked back at me. Not at her, not in her eyes as they all so innocently did, but in mine. I wished I could remember his expression well enough to paint it, but it would have made a silly painting even if I did. He looked dumbstruck.

“I guess someone was in the right place at the right time…” she shakily began to stand again as he set her down.

Gretchen walked my way, pulling my cousin Suzanna off toward the porch outside.

“I hate that guy…” she looked at Suzanna, and she nodded too.

Hated Jack? I know I didn’t know him well, but how could someone hate him? Sure, he just kept showing up in places I needed him even though I didn’t know why, but that wasn’t impacting anyone else, was it?

As she made her dramatic exit, the music changed, and honestly, so did the tone of the night. Now, Jack walked toward me without hesitation. I looked around for any sight of Johnny only to see him dozing off in the corner against a potted plant. He looked even younger when he was asleep- more out of place than he already was.

“Do you want to dance?” He gently grasped my hand, hanging on for my response.

He pulled me in closer, guiding me in the dance as I realized everyone around us was doing the same. It seemed to come out of nowhere.

“I’ve seen your sister and brother around all spring- where have you been?”

“College. I go to art school in California.”

“Art school? What kind of art do you do?”
“I like to paint, but I sketch sometimes too… I take pictures a lot too, for reference and stuff.” I felt like I was talking too much, so I rushed to cover up my awkwardness. “Not like you couldn’t tell- I have a camera around my neck.”

“That’s really cool. I wish my life was that interesting.”

I was stupid- I should have figured that out from the fact he was working in a funnel-cake stand.

Looking around to the other couples dancing, we were definitely the outsiders to the group. While everyone looked to be in love or falling that way, we were not.

If the scene were a movie, everything around would look brighter, and every touch would seem more deliberate and important- like we were building to something greater. As we were now, we were just two people caught in the shuffle; not looking for love in each other though we were both clearly in search of it. And though I watched his every move and kept the thought in my mind that he didn’t treat me like anyone else I had ever met, I didn’t identify what I was feeling as the beginnings of love.

“Can I take a picture of you? You know, for a reference?”

“Stand just the same as you are now.”

I pulled away from his hold, aiming the camera practically in his face since I kept my stance close-this had to be the most accurate representation of our night. I took the picture as the song ended, and it was like the crowd moved on, forgetting who it was for that momentary lapse in time.

“Do you think it will turn out well?”

“They always turn out well enough.”

As I hung the photo on the line, I couldn’t help but reminisce over the feeling. Just thinking about it made me feel all giddy inside, even though I didn’t feel it at the moment. Whatever it was, it was new.

Gretchen walked into my room without a warning, letting the light from the hallway seep in as I tried to shield the pictures from damage.

“Since when are you such a night owl?” She yawned. “Did college make you pull a ton of all-nighters?”

I couldn’t bear to tell her the truth yet- not like she would remember it anyway, since she was so out of it.

“Get to bed- you’ve got work tomorrow.” She came farther in, looking at the photos I hung up. “That boy… is that Jack?”

“Don’t you know who he is? Who he hangs by? That’s not us, Summer- that’s not what McClemores do.”

“It was just tonight, Gretchen… I’ve never seen him before.”

“This better be it.”
She went to leave but hung back for a moment.

“Thanks for, uh… making sure I didn’t embarrass myself too much.”

She went off on her way, and I flopped back on my bed.

I didn’t believe a word she said.