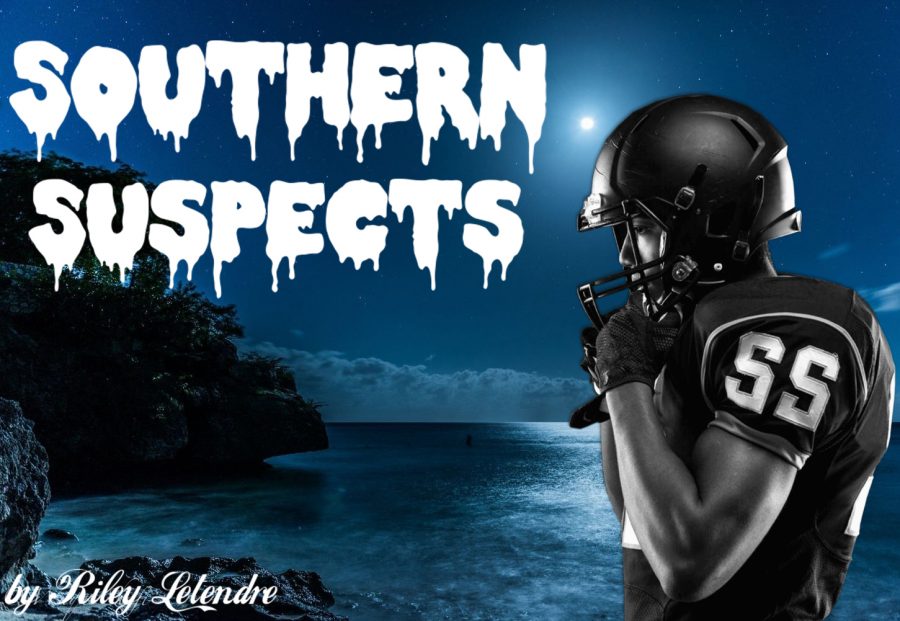 Sanderson and Blake stared me down as I tried to walk past them.

“I don’t think you can handle this case. Maybe you can delegate a little… I’m sure there’s some little old lady who needs help finding her purse somewhere- that’s more your speed.”

“Yeah, you and Bradley,” Blake added with a jealous chuckle. He could make fun of me, but he wasn’t going to joke about Bradley and get away with it.

“Don’t you bring Bradley into this. We’re both your seniors. You should treat us with respect.”

“Barnstable only picked you to be head detective because he has a thing for you!”

I just ran to my office, locking the door and leaning against it so they couldn’t see me through the small window.

“Are you hiding from us, Davies? You should know you can’t hide from a detective…” Sanderson joked.

God, I had never hated someone more than him. Once the hall went quiet, I hopped out of my window to go walk around.

I didn’t want to be found. I just wanted to be alone. But, of course, someone was around. At least it was only Officer Stevens. He was eating his dinner between shifts, watching the waterfront behind the station.

“How’d the interview go?” He prodded, but not in an annoying way.

“I probably shouldn’t tell you.”

“I’ve been out at the crime scene, and I know everything so far- it’s not like I have anyone to tell.”

“You think I’d tell those goons anything? Not after how they treat you.”

“Good… I don’t trust this kid’s parents at all.”

“Is it his father’s whole politician thing, or something else?”

“That’s part of it. I just feel like they didn’t know him well. We’re missing something, and I’m gonna figure it out.”

“I still need to make a call or two.”

“Let me know if you need anything, alright?”

I started back for my office, immediately regretting having gone out the window- I was getting too old to be climbing around like this. I got a big patch of dirt on my pants but was beyond the point of caring since it settled nicely into my coffee stain from this morning. At this point, it was hard to believe all of that was only this morning.

Coming back into the office the next morning, I was exhausted. I couldn’t sleep a wink- my mind was running in circles, trying to catch up to a starting suspect to no avail. I knew it was still too early to tell and that I couldn’t blame anyone yet, but it was hard to live knowing we weren’t anywhere close to justice for Daniel.

Since it was a Saturday, not many people were in for work. Even Sanderson was out, convinced his day off was more important than a case like this. Last night I had put in a call to the principal of the high school, asking him to send a few members of the staff who knew Daniel well to see me. I needed more adult perspectives to get a better idea of who Daniel was before I talked to his friends.

Bradley came into my office, toting a coffee- at least I knew he wouldn’t spill it on me.

“A few of Daniel’s teachers are here to see you.”

“Okay, that’s good- I called for them last night.”

“…I know you don’t like getting Blake and Sanderson involved in all this ‘cause you think they’ll strong-arm the whole thing, but a case doesn’t get resolved by just one person.”

“I don’t trust them. They have a lot of room for bias in a case like this.”

“Yes, you do. They have a bias because of their kids and knowing the parents, that’s true. But so do you- you knew of the parents before all this, and you’re a kid yourself. No one is unbiased in a case on an island this small- no one ever is. Don’t let that be an excuse to push away the help.”

Though I hated to admit it, Bradley was making a good point. I couldn’t act like I was uninvolved in this community, and I need to involve the others to get a more well-rounded perspective.

“I want you to check out Ripley, and I’ll have Blake interview with me.”

I took a deep breath before following Bradley down to Blake’s office. I hesitantly knocked on his open door’s frame, nervous purely because I hated being alone with him.

“You’re interviewing Daniel’s teachers with me.”

“Oh, so you can’t handle it yourself?”

“I can. I just figured I’d give you something to do since you came in.”

He quickly got up to follow me down to the interrogation room, where the teachers were already waiting. Josie, the intern who I hoped, didn’t have more coffee to spill on me, was waiting outside the door. She held a clipboard and seemed very eager to do her job. This was probably a new one for her since our usual receptionist wasn’t in on the weekends.

“I have a… Mark Daniels, Jack Benson, and Piper Raimondo inside for you. They say you called?”

“Yes, I had their principal send staff that was closest to our victim. Thanks.”

She skipped back off to her desk, excited that she did her new job, and we went into the room. Blake tried to take my chair at the table, but I pushed him to his rightful place in the corner.

“Hi, I’m Samantha Davies, head detective of the JIPD- can you all tell me a bit about yourselves?”

“You look a little young to be a librarian…” Blake interrupted.

“Blake…” I sighed. This is why I didn’t usually bother to get him involved.

“I’m sorry, that’s my partner for today, Detective Blake. He’s going to be listening in and recording our conversation today.”

“It’s alright; I know I’m young. I’m 25, and I feel my age helps to connect the kids with what they want to read- at least that’s what the kids say. It also doesn’t hurt that I remember a lot of what I was taught in high school.”

“Yeah, she’s the go-to tutor for my students,” one of the men said. “I’m Jack Benson- I teach junior and senior History.”

“And I’m Mark Daniels, but everyone calls me Coach.”

They all reached across the table to shake my hand, and I did so reluctantly. They were all smiling, seeming excited to be able to talk finally. That wasn’t normal- usually, they were more afraid. I think they all knew it was obvious they were innocent.

“I’m not sure as to what extent you all have been informed, but do you know why you’ve been called here today?”

“Well, obviously, it’s for Daniel.” Coach reasoned. “You wanted to know more about him, Principal Wilcox called us.”

“That’s right,” I said. “We wanted more perspectives from the adults in his life before we dealt with the kids.”

“And to be clear, we are not explicitly considering any of you as suspects. This is just to gather information. But if we uncover something here, you may be added to our list.” Blake imparted.

I didn’t like the way he phrased that- it made it seem like they had to be on edge- like they had something to hide. That was never good. I just shook my head, moving to ask the next question.

“So Coach Daniels, describe your relationship with Daniel.”

“Daniel was my star. He was a leader for our team, and he saw everyone equally. Sometimes he was a pain, but everyone was a pain. He would just get really focused on winning, and somebody had to tell him it couldn’t always happen. He couldn’t take no for an answer- he would always fight back.”

“Would you say he was into fighting?”

“No. I mean, verbally maybe a little, but he wouldn’t be like tackling any of the guys or ‘nothing. Other guys on the team did that, but not him.”

“Okay. What about you, Mr. Benson?” Blake stood, coming to sit at my side.

I was right- he was trying to take over the meeting. I mean, this information wasn’t the most important for catching our criminal, but it was important for re-tracing Daniel’s steps and actions.

“To be quite frank, I don’t know why they sent me down here. I had Daniel for his junior history class, but that was all. I have dozens of students a day- Daniel never caused me trouble, but he never really stood out to me.”

“What kind of grades did he get?”

“B’s and C’s. Could have done better if he studied for his tests, but he always claimed football practice went too long…”

Jack gave a shady side-eye to Coach- I guess there was a little conflict there. I thought it was a little odd that the principal sent Jack down when he didn’t even know him all that well. It made me question if anyone really knew this kid. The coach was probably our best bet, but we still had the librarian to get through.

“Well, I helped tutor Daniel through all his high-school math- Algebra 1, Geometry, and Algebra 2. He was pretty hard on himself, but he wasn’t dumb. The way his teachers taught math didn’t work for him, so we figured out our own system. He was a real nice kid.”

Blake was quick to interrupt before I could speak again.

“I believe that’s all we need. Thank you for coming down.”

They all stood and began to leave.

“Blake, what are you thinking?”

“We weren’t getting anything interesting. The only one who was really his friend was Coach- if you want, you can call him back some other time. If there’s anything I’ve learned, it’s that it’s best to just trust the parents.”

“His parents gave us practically nothing.”

I started leaving through the opposite door our guests had, but Blake couldn’t take the hint and kept following me.

“You know his friends and his family. It’s far more likely that it was someone in his close circle than one of his teachers or someone random.”

“I never said it was one of his teachers!”

He went back off toward his office, and I went to mine. I didn’t need more from Coach or Benson. I wanted more from Raimondo.